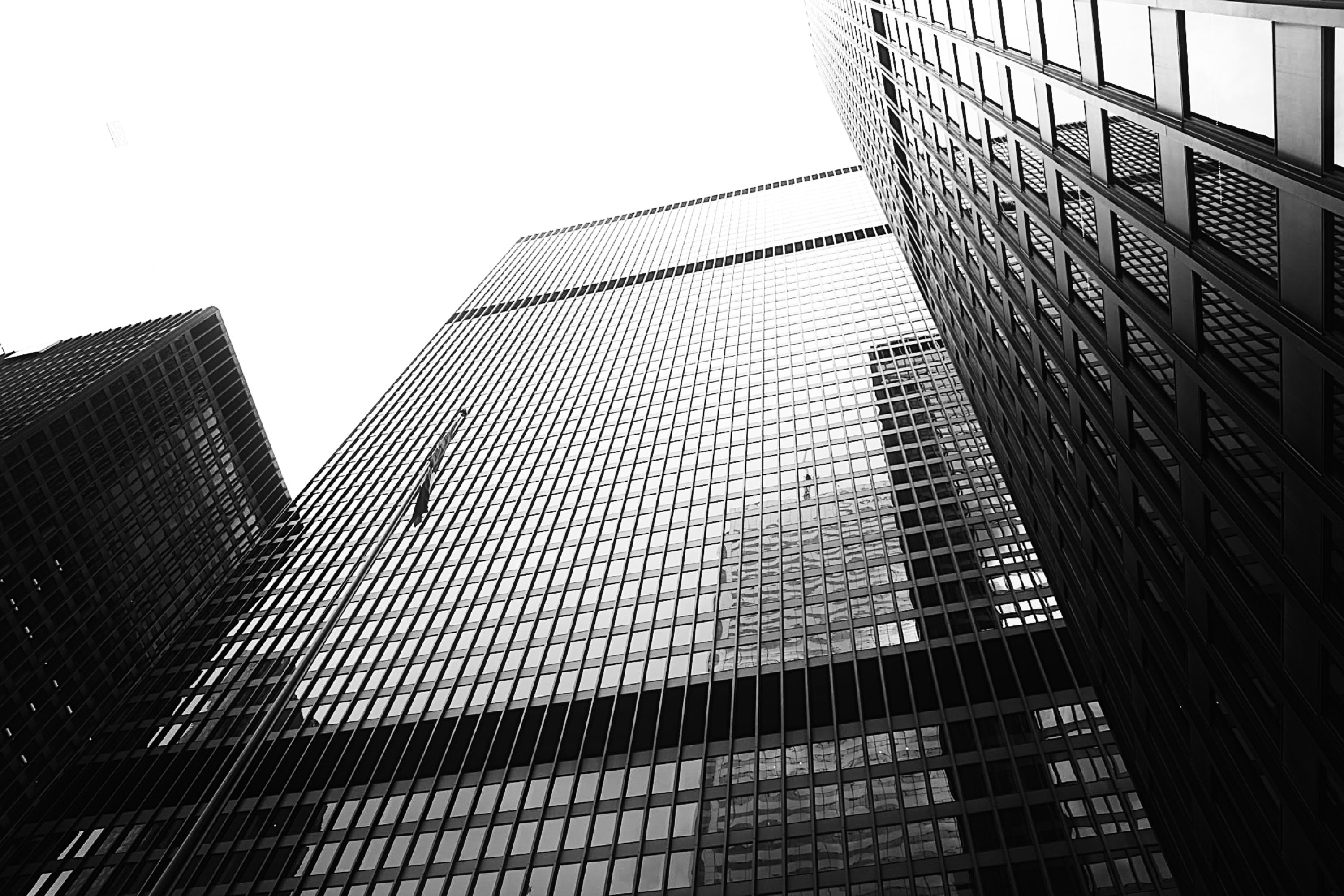 The Global Financial Crisis (GFC) in 2007-2009 was triggered by inordinate speculation in tandem with excessive debt and loose supervision. Fortunately, governments and central banks came to the rescue, cutting interest rates, recapitalising banks and passing significant stimulus packages. This led to governments taking over enormous volumes of debt from banks and companies, which in turn, led to substantial government debt. These interventions played out well as economies recovered from the crisis, providing central banks the opportunity to start removing their unprecedented stimulus. However, while this was taking place, the COVID-19 pandemic broke in 2020. Central banks swiftly dusted off their GFC playbooks and interest-rate cuts and more stimulus came into play.

This time, however, the results were slightly different. Supply bottlenecks caused by lockdown restrictions and ‘helicopter money’ gave rise to inflation. Now, the most powerful economies in the world worry about inflation in a way that was unthinkable not so long ago.

In January 2009, Captain Chesley Sullenberger safely piloted his crippled US Airways plane to an emergency landing in the cold waters of the Hudson River, saving all 155 passengers on board. They called it the ‘Miracle on the Hudson.’

Currently, the US Federal Reserve Chair, Jerome Powell, is about to attempt his own tricky touchdown – curbing inflation that is running at 40-year highs, without crashing the economy into a recession by raising interest rates just enough to cool demand but not ‘kill’ it. It is something the Fed has arguably pulled off perfectly just once, in 1994/95, when Alan Greenspan engineered a proverbial soft landing.

Widely believed to be behind the curve, in 2021 the US Fed signalled its intent to raise US interest rates to combat run-away inflation and announced a 0.25% hike at its March 2022 meeting. The market – Fed dot-plot – now expects US interest rates to rise a further six times in 2022, peaking at 2.8% by the end of 2023. This is a substantial realignment compared to only five months ago when inflation was still deemed transitory. As the quarter ended, the US Fed stepped up its rhetoric on fighting inflation, and the market quickly priced in a 0.5% hike at the next FOMC meeting. The Bank of England (BoE), which was the first major developed central bank to kick off the current hiking cycle, increased its policy rate for the third time in March to 0.75%. The European Central Bank (ECB) left rates unchanged at its last meeting but the pressure is building as inflation in the eurozone surged to a record 7.5%, bringing forward the likelihood of an interest rate hike in July. Most emerging economy central banks have already tightened monetary policy, including South Africa which has had two 0.25% increases since the start of the year.

The challenge for central banks currently is raising rates through a significantly uncertain global economy, with the war in Ukraine raising concerns over the danger of a major country such as Russia collapsing as a result of economic sanctions. The surge in oil and gas prices – rising energy bills – could also moderate consumer demand and increase the chance of a recession.

“The economic plane is coming into the tarmac at a very high rate of speed, buffeted by severe crosswinds from the pandemic, with a lot of fog created by uncertainty due to geopolitical events.”

Since the start of the year, the 10-year US Treasury yield has risen rapidly, from 1.5% to 2.3%. This has caused high-growth areas of the market – such as the information technology sector, for example – to come under significant selling pressure. Higher interest rates and a higher interest rate outlook distresses most companies in several ways:

Overall, the broader MSCI World Index lost 5.1% in US dollar terms for the quarter but still showed a healthy return of 10.6% for the 12-months to the end of March 2022. Emerging market (EM) equities were hit the hardest, losing 7% of their value in Q1 and 11.2% over the past year. Within EMs, commodity-exporting countries such as SA and Brazil performed better, rallying 20.1% and 35.9% respectively. The sell-off in Chinese companies hurt the EM Index, which lost 14.2% for the quarter. China makes up approximately 31% of the EM Index.

“Relentless’, the sell-off in Chinese technology stocks ……but then the turning point in March!

Lingering concerns over regulatory interventions remain an overhang for the sector and antitrust and ‘common prosperity’ have taken a bit of a backseat. But there are new challenges on the horizon – in mid-March, The Wall Street Journal reported that Tencent is facing a record fine related to its WeChat Pay platform violating anti-money laundering regulations in China. In addition, US authorities added five more names to a US ‘audit requirement’ list. Both of these events triggered another significant sell-off.

BUT then the big turning point….

US heavyweight boxer, Mike Tyson, once observed that everyone has a plan until they get punched in the mouth. Faced with an unopposable force, one must rethink their strategy and that is what China’s government is doing. After more than 18 months of playing hard ball, the tone has somewhat shifted. In mid-March, Chinese officials promised to ease a regulatory crackdown and pledged support for companies in the sectors. On 15 and 16 March, the index of Chinese firms listed in the Asian financial hub posted its biggest advance since 2018. The Hang Seng Tech Index was up a staggering 16.8% in just 2 days and up more than 30% from its March lows after Beijing indicated that they sought to modify a rule that restricts offshore-listed firms from sharing sensitive financial data with foreign regulators. That may allow the US to gain full access to audits and thus reduce the risk of Chinese firms losing their Wall Street listings. However, the index is still down almost 25% from its June 2021 high owing to a year-long crackdown on the sector.

While Beijing’s vows have spurred a sharp turnaround for equities after what seemed like a bottomless decline, investors are debating how sustainable this rebound can be and maintain a ‘wait-and-see’ stance to see if verbal promises materialise into concrete policies.

The Bloomberg Barclays Multiverse Index fell 6.1% in US dollar terms for the quarter and lost 6.2% over the past year. US 10-year Treasury yields continued rising, as high as 2.3% over the quarter, as inflation expectations heated up and short-term rates – as measured by US 2-Year bonds – rose by more.

Using the current US bond market as one of the leading indicators – bearing in mind that there are many market forces at work at any given time and that the yield curve does not cover the full picture –the Treasury yield curve inverted at month-end and there are growing concerns that rapid acceleration of interest rate increases could cause a global recession. Weak growth in the US is typically bad from a global growth perspective and particularly bad for EMs and EM currencies.

The yield curve became inverted at two crucial moments in time: just prior to the oil crisis recession in the 1970s and before the bursting of the technology stock bubble in 2000-2001. 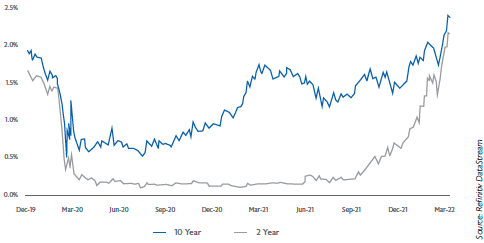 An inverted yield curve is one in which shorter-term yields are higher than longer-term yields – this can be a sign of an upcoming recession or economic slowdown. Yield curve inversions have a good track record of happening right before a recession, according to the Bank of America. According to them, 10 of the last 13 recessions have been preceded by the 10-year rate falling below the 2-year rate. At the time of writing, the yield curve remained inverted with the 2-year yield trading higher than the 10-year yield.

A deep stagflation* shock is a nightmare scenario for central banks, one in which they will be damned if they react, and damned if they do not. In an environment of rising inflation where central banks are already behind the curve, slower policy tightening could accelerate the de-anchoring of inflation expectations and further exacerbate stagflation. But if central banks remain hawkish – or become more hawkish – the looming recession will become more severe.

*Stagflation can be defined as a period of inflation combined with a decline in the gross domestic product.

South African equities showed remarkable resilience in Q1 2022, with the FTSE/JSE All Share Index returning 3.8% for the quarter. Within the equity market, resources returned 19.1%, financials were up 18.8%, and telecoms rallied 11.9%. In these sectors, Sasol (+37.1%), Standard Bank (+30.1%) and Vodacom (+20.7%) weathered the global geopolitical and macro-economic storm the best. Industrials fell 13.1% for the quarter as negative news on Tencent weighed heavy on Naspers, which lost 32.7%. Other underperforming sectors for the quarter included consumer discretionary (-15.2%) and beverages (-9.7%). Preference shares advanced 7.9% for the quarter, while listed property shares fell 1.6%. The property sector recovered significantly in March (+4.4%) as many companies started reporting robust operational updates. Both locally and globally, value shares continued to outpace growth shares, while in SA the outperformance of smaller shares over their larger counterparts, was more noticeable than in global markets.

Local bonds were 1.9% higher in the first quarter and the rand continued to hold water relative to major currencies, gaining 8.3% against the dollar for the quarter. While respectable, however, this performance was behind local equities. Shorter dated bonds (+1.3%) underperformed their longer duration counterparts (+2.8%) while inflation-linked bonds (+0.4%) underperformed nominal bonds as the market became less concerned about inflation surprising beyond what is already known.

The South African Reserve Bank raised interest rates 0.25% in January and March respectively. Sentiment within the Monetary Policy Committee (MPC) has clearly turned more hawkish, with two of the five members voting to increase rates by 0.5% at the March meeting. Given global inflationary pressures, one can understand the MPCs concern even though local inflation remains well contained at 5.7% for the year to February 2022. The 3×9 FRA is pricing interest rate hikes of 50 basis points in at least three of the four remaining meetings this year.

A spanner in the works – Putin

The new era of higher interest rates was on the cards long before Putin began his military attack on Ukraine. The challenge is that the attack on Ukraine is, at the very least, exacerbating price pressures. Many economists worry that as a result of Russia’s invasion of Ukraine – with the price of gas and commodities spiking – Putin may become a spanner in the works as the additional burden of higher interest rates to stem inflation could choke off growth entirely and that a global stagflationary recession is now highly likely. In addition, if finance (sanctions) – is used as a weapon of war, it could result in the collapse of the Russian economy.

The war in Ukraine may trigger a massive negative supply shock to the global economy – which is already struggling with supply-side shortages due to the pandemic – reducing growth and further increasing inflation at a time when inflation expectations are already becoming unanchored.

FNB Securities tempered their growth outlook over the past few weeks from both a global and a SA perspective and note that forecast risk has increased substantially due to the conflict in Europe. In SA they now see economic growth of 1.7%, reduced from 2.2%, for 2022. Unfortunately, this is insufficient to boost income and job creation, making pro-growth reforms all the more necessary.

A sustained $20 shock in the oil price will lower gross domestic product by 0.6% in the euro area and 0.3% in both the U.S. and China’ – Goldman Sachs Group Inc.

The paradigm has clearly shifted, with central banks now having a distinct bias towards tighter monetary policies. Today, as investors come to terms with the end of the era of free money, financial markets are concerned and characterised by massive volatility as central banks attempt to navigate a soft landing through all the turmoil, uncertainty, and now the spanner in the works, Putin…

Tax-Free Savings Accounts (TFSAs): How to select the most appropriate investment portfolio

Fees alone cannot be the driver of improved performance