The effective date of the transaction is expected to be in the first half of 2022 and will be dependent on the fulfilment of relevant suspensive conditions, including approvals from competition authorities. On conclusion of the transaction, SIH is expected to have assets under management, administration, and advice, of more than R1 trillion, making it one of the largest asset management firms in South Africa. Absa also intends to dispose of its Linked Investment Services Provider business to Glacier, which is owned by Sanlam.

African Rainbow Capital holds a 25% stake in SIH, with Sanlam owning the balance of 75%. Both businesses, in a statement, believed that the combination of the two firms will strengthen SIH’s position as one of SA’s largest blackowned asset managers.

Bernard Fick, the Chief Executive Officer of Prudential SA, announced his resignation from the firm. He has been with Prudential since 2008 and was appointed CEO in 2010. He will step down in October but will continue to be involved in the business for the rest of the year. Chris Sickle will take over the role of CEO. Chris has been with Prudential since 2019, having joined as Chief Financial Officer. Before joining Prudential, Chris worked at Ernst & Young as the Regional Managing Partner in the Western Cape. Chris has more than 22 years’ asset management experience.

• The Chief Executive Officer role in the business has been formalised, with Malungelo Zilimbola filling the position, leading the business and growth initiatives.

• Asanda Notshe has been appointed Chief Investment Officer, effective 1 September 2021. His experience at Mazi spans being a part of exco and having occupied been Head of Research, a senior portfolio manager and a senior analyst.

Seriti Capital Partners acquired 100% of Cannon Asset Managers effective September 2021, from Bidvest Financial Services. This follows Adrian Saville’s departure at the end of March, from the company he founded in 1998 as an independent investment house.

The merged entity sees Cannon’s empowerment credentials improving, with Simpiwe Mayekiso as the new Chief Executive Officer and Tshepo Modiba taking over the position of Chief Investment Officer. Simpiwe has more than 20 years’ asset management and private equity experience having worked for the Eskom Pension and Provident Fund and Pan-African Private Equity. Tshepo, together with Deshan Naidoo, founded Seriti after both having worked at Cannon as investment managers.

Keillen Ndlovu, head of the STANLIB Listed Property franchise, recently resigned and will be leaving during October, after 16 years with STANLIB. Nesi Chetty, a senior portfolio manager in the team will be taking over as the head of the franchise. Nesi has 20 years of experience, with two years having been spent at STANLIB co-managing the local and global property funds with Keillen. Prior to joining STANLIB, Nesi managed the flagship Momentum Property Fund.

Charl de Villiers joined Ashburton in September as Head of Equities. Charl joined from Sanlam Investment Management (SIM), having been co-portfolio manager of the SIM General Equity Fund. He was at SIM since 2008 and has a BTech Electrical Engineering, an MBA from the University of Cape Town; and is a CFA charterholder. Daniel Masvosvere also joined Ashburton in September from SIM as an equity analyst.

Nicole Hamman was appointed as Governance Analyst in the investment team, effective from 1 August 2021 and Stephan Bernard was appointed as an Environmental and Social Analyst. Stephen is a qualified actuary and joined Allan Gray in 2013 as a manager in the Institutional Clients team. Kabir Bedasie has been appointed as a Credit Analyst, having joined Allan Gray in 2018 as a trainee analyst on the Graduate Analyst Program and was a Business Analyst in the Institutional Clients team.

Tracy Brodziak joined Coronation on 1 July 2021 as an investment analyst, focusing on the insurance sector. She was previously a member of the investment team at Old Mutual Investment Group. She has more than 20 years’ experience in equity analysis and portfolio management within the SA listed equity space.

Futuregrowth – additions to the credit team

Irina Schulenburg joined Old Mutual Investment Group on 1 October 2021 as a Senior Equity Analyst. She has 15 years of industry experience and was previously at Foord Asset Management as an Equity Analyst for seven years.

Vuyolwethu Nzube joined Truffle on 1 July 2021 as an ESG Analyst. She started her career as a Manager Research Analyst in 2014, prior to joining Perpetua in 2017 as an Equity Analyst.

STANLIB Multi-Manager has extensive coverage of local asset managers and in 2020, conducted a survey to evaluate how managers incorporate ESG factors and considerations in their investment processes. In this regard, we have noted a strong improvement across managers, irrespective of size. Another angle to ESG involves assessing how asset managers operate or are making headway in incorporating ESG with the intention of running sustainable businesses and we have conducted a relatively open-ended survey to evaluate this level of integration. Although we only received 46 responses out of the 63 surveys sent out, we recognise that this is a unique angle and believe increased awareness and education could drive up these response rates.

The aim of the 2021 survey is to understand how the three-year strategies of the businesses incorporate sustainability, as well as if their Corporate Social Investment is considered in the context of society, the environment and whether these were linked to the United Nations Sustainable Development Goals (SDGs). These insights will be provided in an upcoming research note in November. In the interim, however, an infographic has been provided below, which gives a high-level sense of the managers’ initiatives that align with the SDGs.

For example, with regards SDG 3 – good health and well-being – many companies have a wellness programme in place for their employees. One of the companies surveyed has subscribed to an activity-based mobile rewards application called Strove, to inspire a healthy and active lifestyle for their employees. Another manager is sponsoring an NPO named Qhubeka that donates bicycles as part of the World Bicycle Relief’s charity programme in South Africa. Bicycles enable disadvantaged individuals to have access to schools and jobs, while at the same contributing to their health and fitness, which we find a unique way one can contribute to the SDG. 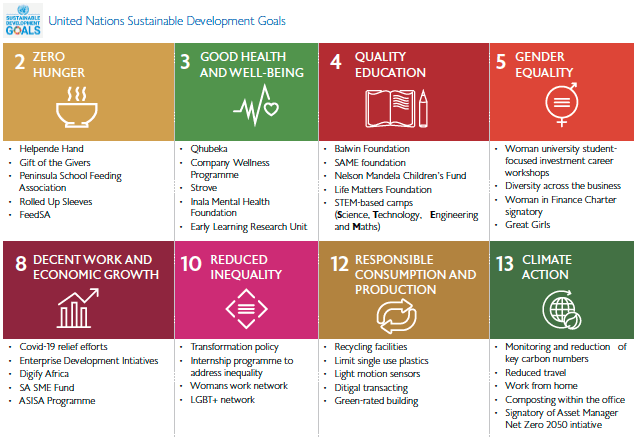 Tick all the right boxes – partnering with a multi-manager