SA economy dealt a double blow during the quarter

The local economy took another blow from the impact of lockdown as the third wave of the pandemic, resulted in more stringent regulations and anger poured into the streets in a wave of looting and destruction. Combating the pandemic remains a challenge but the devastation and aftermath of the plundering massively undermined South Africa’s economic recovery at a critical stage, given the need for sustained job creation and renewed fixed investment spending.

Sadly, the double blow in the quarter adversely impacted already depressed employment numbers. While South Africa has added back many jobs since the severe COVID-19 related lockdown levels in Q2 2020, the number of people employed, formal as well as informal, remains a staggering 1.44 million below the level of employment prior to the onset of the pandemic. 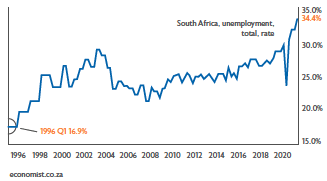 In effect, almost three-quarters of all young people in SA are currently unemployed because they simply cannot find work, or have stopped looking for work.

‘Clearly, the rate of youth unemployment is a national crisis, with significant social, economic, and political implications, yet the political environment appears to still lack the level of urgency required to start to deal with the crisis” – Kevin Lings, Chief Economist – STANLIB

At its last meeting, the US Federal Reserve decided to maintain the target range for its benchmark policy rate at zero to 0.25% and to continue purchases of treasuries and mortgage-backed securities at a pace of $120 billion per month. However, ongoing price (inflation) pressures in the US have fuelled debates over the timing of the start of the central bank’s asset-purchase tapering and other monetary policy adjustments designed to assist the economy to avoid ‘overheating’.

Most Fed officials agreed it would be appropriate to begin tapering the $120-billion-a-month bond-buying program before the end of the year. Jerome Powell said the bank could begin scaling back asset purchases in November and complete the process by mid-2022. At the same time, the Fed cautioned that a move to begin winding down the bond-buying program should not be interpreted as a sign that rate hikes would soon follow. The Fed is expected to hold the target range for the federal funds rate at the current level until the economy reaches conditions consistent with maximum employment and inflation has reached 2% and is on track to moderately exceed 2% for some time. The consensus among economists polled by Reuters is for rates to remain near zero until 2023 but more than one-quarter of respondents in the September survey forecast the Fed raising rates next year.

Part of the reason US markets have been so strong and for so long is the complacency that inflation is gone and that central banks can keep interest rates low for a very long time. Yet so many things are in flux – the pandemic is not over, supply chains have bottlenecked and surging energy costs are affecting all sorts of prices.

The S&P 500 ended a seven-month winning streak in September, posting a 4.7% monthly decline. Contributing to the sell-off was, among other things, higher bond yields in the US, concerns around fiscal and monetary policy, expectations for elevated inflation, regulations in China, and the ongoing pandemic.

The broader MSCI World Index was flat in US dollar terms for the quarter but still showed a healthy return of 27.9% for the 12-months to the end of September 2021. After a very strong first quarter, emerging market (EM) equities lagged developed markets (DM) in Q3 on the back of lower commodity prices, a stronger dollar; and Beijing’s crackdown on businesses. This is the worst third quarter for EMs since 2015. The MSCI Emerging Market Index lost 8.0% in US dollar terms and ended the year up 18.5%, lagging DMs.

The Bloomberg Barclays Multiverse Index fell 0.9% in US dollar terms for the quarter and is largely flat over the past year, down 0.4%. US Treasury yields continued rising – as high as 1.49% over the quarter – to the highest level since June, as inflation expectations heated up and fears grew that the US Federal Reserve could shorten its timeline for tightening its monetary policy. Investors bet the Fed would carry through on its promise to curb its emergency bond-buying stimulus as inflation jumps.

On the local front – weaker global markets weigh on the JSE

The ALSI lost momentum in the quarter amid weaker global markets, which reeled from a sharp decline in commodity prices, delta variant woes, the threat of US inflation creeping in faster than expected, and in September, the effects of a possible credit default from Chinese property group, Evergrande.

The FTSE JSE/All Share Index lost 3.1% in September and lost 0.8% for the quarter, dragged down by tech heavyweights Naspers/Prosus and big mining companies. The Technology sector lost 19.3% in Q3. Resources plunged 9.3% in September and industrials lost 0.8%. Financials, however, went up 1.7% thanks to strong performance from life insurance companies. For the quarter, resources fell 3.6% and industrials were down 4.3%, while financials rallied 12.0%.

For SA investors, a significant issue has been the stricter regulation of Tencent, the leading investment in the Naspers/ Prosus camp. Tencent was recently ordered by Xi’s government to halt the acquisition of music licensing rights on an exclusive basis for its music streaming service. The company was also impacted when regulators published reforms that will fundamentally alter the business model of private firms teaching the school curriculum. The new regulations ban firms that teach school curriculums from making profits, raising capital or going public.

“China does not want to see a situation in which only the rich can afford to hire private tutors to get their children through these incredibly hard exams. Beijing wants to see a good portion of its young population properly educated, not just an elite.” – Michael Power, Strategist – Ninety One

To further rub salt into the wound, last month the Chinese regulator announced that children under the age of 18 years would only be allowed to play online video games for up to three hours per week. The regulator also temporarily slowed down approval for all new online games in a bid to curb gaming addiction among young people. The latest move is a fresh blow to Chinese gaming giants, which spooked investors and dented the value of Chinese tech stocks.

A renewed meltdown in commodity prices shaved billions off the value of some of South Africa’s biggest mining companies during the quarter. Iron ore prices saw the biggest hit, falling from a record high of $235.6 per ton in May to $112.6 per ton by the end of the quarter.

China increased stringent new restrictions on steel production to curb pollution. According to CNBC, the steel sector contributes up to a fifth of carbon emissions in that country. Other metals have also fallen amid concerns about faltering global economic growth. Palladium, which is used in catalytic converters in car exhausts as an emissions-control device, has also taken major strain due to reduced vehicle production as a result of a shortage in semiconductor chips.

Although property companies fell 0.2% in September, they gained 6.5% for the quarter and a whopping 58.1% over the past year. It is almost unbelievable to think that just a year ago, many companies were struggling with rental collections and were on the brink of breaching bond covenants. The reduction in lockdown restrictions and the opening of various economies as countries reach herd immunity coupled with self-help initiatives like cutting distribution pay-out ratios and shoring up balance sheets has helped property companies. Moreover, many companies went from trading at premiums to their net asset values, to trading at discounts, making them attractive to many investors. Neighbourhood centres proved to the resilient at the height of the pandemic while some super-regional sectors benefitted from the travel restrictions, as people resorted to high-end shops to satisfy their retail therapy.

The recent looting in Kwazulu Natal and some parts of Gauteng threatened the recovery in Q3 but fortunately, the incidents were isolated to a few centres.

As the sell-off in global bond yields continued to keep foreign investors away from local bonds, foreigners have been net sellers of SA bonds to the tune of R96 billion this year. The flagship R2030 saw its yield sell-off from 8.9% in June to 9.2% in September as investors started worrying about tapering in the US. Moreover, the sell-off in the rand coupled with the higher oil price brought back inflation concerns. The rand weakened against the US dollar from R14.3 in Q2 to R15.0 in Q3 and oil traded closer to $80 a barrel in September, up 85.1% in the past year. The ALBI produced a muted 0.4% for the quarter, with bond returns driven by the short end of the curve, up 1.5%. Cash performed better gaining 0.9% but has returned a pedestrian 3.8% in the past year.

In a unanimous vote, the SARB kept interest rates unchanged at 3.5% at its September meeting.

Emerging positives – it is not all doom and gloom

There are a number of positives emerging in terms of SA’s economic trajectory on much-needed investments and employment imperatives. They are, however, dependent on the government.

International trade is at record levels, which helps economies with high dependencies on import and export revenue. Firm commodity prices have resulted in the highest terms of trade on record in South Africa, particularly with the rise in gold, coal, and platinum prices earlier in the year. SA’s imports and exports make up more than 50% of GDP and if the port system is freed up, it will help in terms of growth.

South Africa’s current account balance has widened to its largest surplus ever at R343 billion for the second quarter – this means more money is received from foreign countries than what is paid to them. A healthy current account balance will help offset some of the risks associated with capital outflows in the event of a premature withdrawal of global liquidity.

Surging corporate tax revenues from bumper commodity prices and sharp bounce-backs in growth as economies have reopened, means that government revenues are going to be ahead of budget this year – almost 10% higher than forecast. It is crucial that SA does not commit to structurally higher spending as a result of this cyclical increase in revenues. Windfalls should be invested, saved or used to pay down debt.

Inflation is under control, paving the way for a stable domestic interest rate environment, even if the US Fed begins hiking rates earlier than expected. This can only benefit the SA economy by kick-starting much-needed growth as interest rates remain at five-decade lows.

The private sector’s participation in new energy projects means that companies have greater freedom to secure their own electricity supply. The government’s latest renewable energy procurement round will require 2 600 MW incapacity to be installed in the next three years and this will be funded and built by private players.

The local economy is benefiting from strong global growth and the boom in commodity prices, as well as low-interest rates. Therefore, the 2021 growth rate is likely to be very strong – albeit from a very low base – in the region of 4% following the record 6.4% contraction in 2020. However, the positives that are emerging recognise the downside risk to the current and expected growth forecast.

The recent progress in the vaccine roll-out is encouraging and could provide impetus to the economic recovery if momentum is maintained and if government implement the structural reforms spoken about over the past 10 years – to reinstall investor confidence, increase fixed investment and ultimately, higher employment. The country’s challenges are not insurmountable.

“We will tell President Ramaphosa that we can help to bring investment. But we need regulatory stability, we need policy certainty” – Bonang Mohale, President – Business Unity SA