Download and view the full article
MOVERS AND SHAKERS

To facilitate the above transactions, Prudential’s black empowerment partner, the Thesele Group, will reduce their shareholding from 22.0% to 21.8%. The proposed change in ownership levels will have no impact on Prudential’s BBBEE rating, which is currently at Level 2. This rating is expected to improve to Level 1 during 2021.

These changes do not affect the current management structure or the local investment team.

The Prudential Equity Fund will continue to be managed by Chris Wood and Yusuf Mowlana. Aadil Omar will no longer have direct responsibilities with regards this fund and will instead focus on his role as Head of Equity Research and Co-Portfolio Manager of the House View Equity portfolio.

The Prudential Dividend Maximiser Fund will continue to be managed by Ross Biggs and Kaitlin Byrne. Prudential’s Select Equity institutional client portfolios will be managed by Leonard Krüger, Ross Biggs and Kaitlin Byrne. In addition to being a member of Prudential’s Asset Allocation Committee, Leonard Krüger is also Co-Portfolio Manager of the Prudential Balanced Fund, the Inflation Plus Fund, the Target Income Funds, and various institutional multi-asset mandates.

Prescient Investment Management announced that Guy Toms will be giving up his role as Chief Investment Officer to take up a new role as Strategist. This role will allow him to have additional capacity to develop talent within the company. He will continue to have oversight of Prescient’s process and philosophy.

Bastian Teichgreeber will take over as Chief Investment Officer. He is currently the Head of Asset Allocation and Investment Research and will continue as Co-Portfolio Manager on the Prescient Balanced fund. He has been with Prescient for six years and has 16 years’ of industry experience. capabilities.

Other changes in the team include:

Ruan Stander resigned from his portfolio manager role, effective 28 February 2021, to focus on personal interests. He joined Allan Gray in 2008, became a portfolio manager in 2012 and started to manage a portion of the Balanced and Equity funds in 2015. Allan Gray’s investment process relies on multiple portfolio managers, each making individual decisions. This multicouncillor model facilitates succession and a seamless transition of responsibilities. Ruan’s responsibilities will be allocated across

Conway Williams, the joint-Head of Unlisted Credit, left to join Prescient Investment Management as Head of Credit. He is be joined at Prescient by a previous colleague, Michelle Green, who joins as a Credit Analyst.

At the end of March, Adrian Saville left Cannon Asset Managers, a company he founded in 1998 as an independent investment house. Adrian has joined Genera Capital. Over the years, Cannon has undergone several ownership changes. This saw Adrian’s controlling stake being reduced and ultimately, Cannon being wholly owned by Bidvest Financial Services. In addition to his role as Chief Executive of the company, Adrian was responsible for managing local and global active and passive mandates.

Adrian handed over his leadership role to Samantha Steyn who has been with Cannon since 2013, having previously worked at Atlantic Asset Management as a fixed income analyst. She joined Cannon Asset Managers as a portfolio manager and became the company’s Chief Investment Officer in 2017.

Sam Houlie, Chief Investment Officer and Portfolio Manager for various equity and multi-asset class funds, left Counterpoint Asset Management at the end of March. Sam joined Counterpoint in November 2016. His departure comes after two acquisitions by Counterpoint in 2020. Paul Stewart will act as both Chief Executive Officer and Chief Investment Officer. Paul took on the role of CEO at Counterpoint after it acquired Bridge in 2020. The full integration of the combined businesses – Counterpoint, Bridge and RECM – is expected to be finalised by the end of the first half of 2021. The company manages approximately R8 billion in assets.

Shamier Khan left Element in January 2021. He was Co-Portfolio Manager on Element’s range of Shari’ah unit trusts. He has joined the client servicing team at NinetyOne. Shamier joined Element as a Shari’ah Portfolio Manager in October 2013, having previously worked at various investment and banking institutions. Terrence Craig, founder of Element, and Andrew Bishop, Portfolio Manager, have assumed Shamier’s responsibilities. Both have been at Element for more than ten years.

Mervin Naidoo resigned as Head of Research to join the stockbroking arm of the business as Head of Advisory Business. His responsibilities have been allocated to the Head of South African Equities, Paolo Senatore, while they search for a suitable replacement.

During the first quarter of 2021, 32 managers, representing R6.2 trillion in assets under management, participated in a STANLIB Multi-Manager incentivisation survey in which we delved into structures used to remunerate investment professionals. As part of our due diligence process, remuneration structures form an important component of manager analysis. We believe incentivisation structures should align with clients’ interests and be appropriate to retain and grow investment talent.

Of the respondents, 59% described their business as boutique, 22% as medium and 19% as large. Interestingly, 66% noted that they believe they pay in line with average market salaries, 19% feel they pay below average and 13% feel they pay above
the perceived market average. Most managers (53%) rely on data supplied by a third-party remuneration survey to inform their salary packages and 22% rely on internal research. From
our many years of experience with due diligences we have noted that managers who pay below market-related salaries usually consider frequent bonuses or profit share as a better incentive.

Additional incentive structures have four common
components, regardless of the size or type of business.

These components are i) a performance bonus; ii) equity ownership; iii) share options; and iv) profit sharing. Generally, managers use a combination of incentives and only three of the managers surveyed used all four types.

Where there are bonus deferrals, a weighted average of 39% is deferred for between two and three years. Our high-level assessment indicates that bonus deferrals do not influence the average tenure of 6.7 years, nor the average investment experience in the team – approximately 13 years.

Of the respondents, 47% allow for equity ownership and/or profit sharing. Of those that allow for some degree of equity ownership (excluding staff share trusts), 73% are boutique managers. Share options were the least popular incentive structure, with only 28% of managers offering this and of which 22% are large managers. There are various tenures required for ownership or share options to vest, with the most common being three years.

It is pleasing that almost 47% of respondents allow for equity ownership, which we believe could promote long-term team stability. We will investigate further to pick up any trends relating to staff retention. 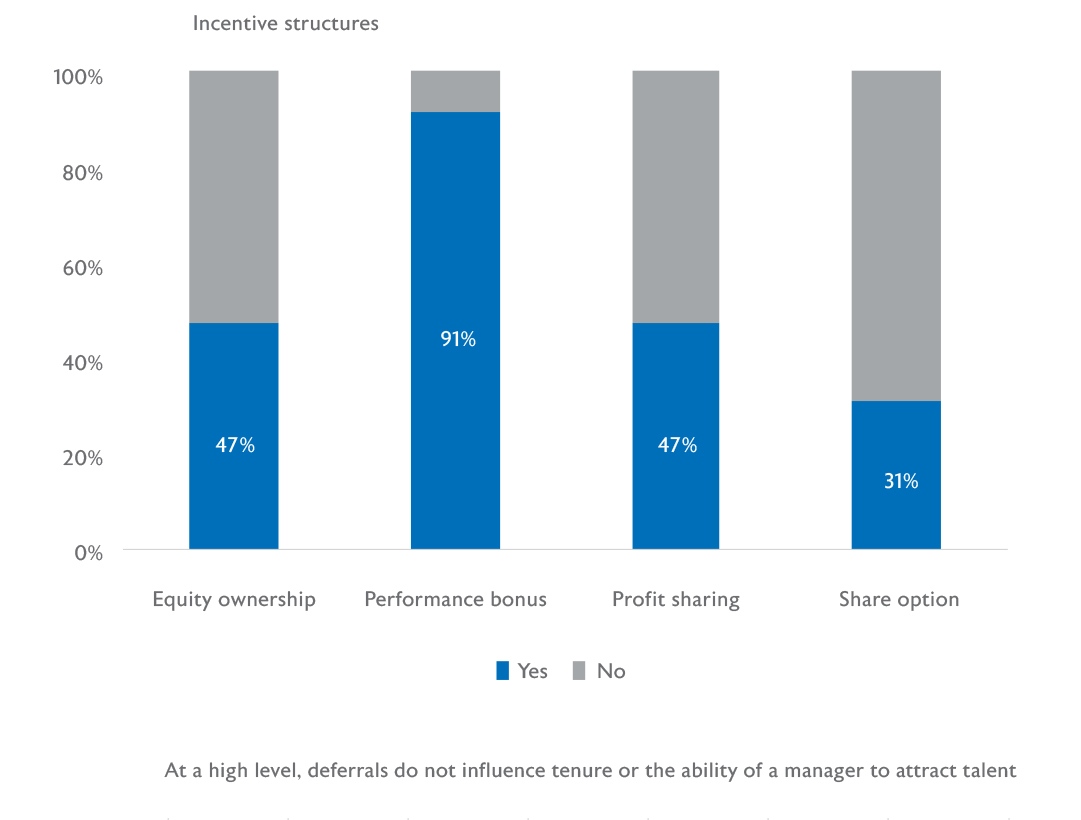 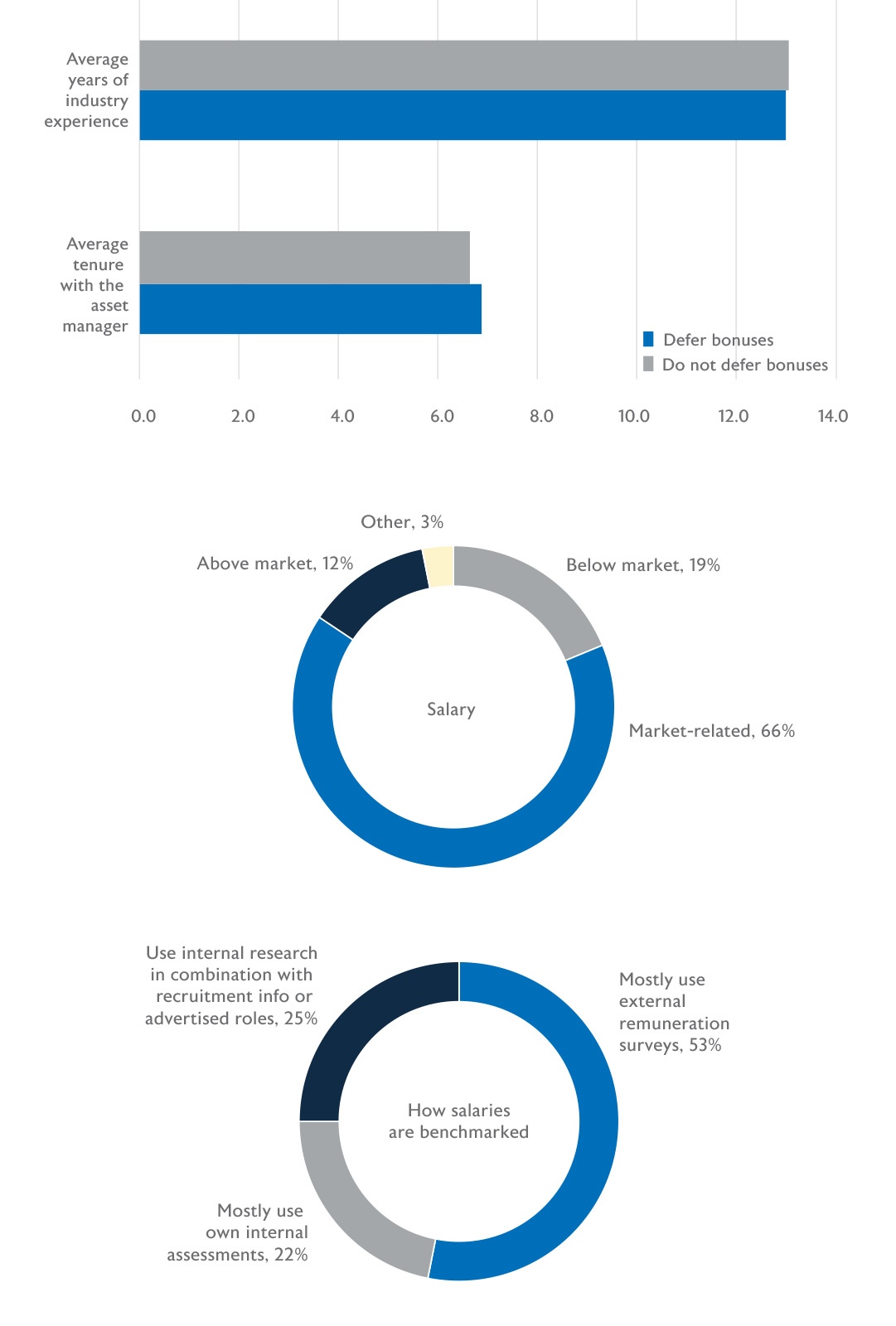 Benchmarks: ‘Keeping up with the Joneses’